One of the first internet protocols that would change the face of the Internet was ARPAnet (Advanced Research Projects Agency Network). Initially designed for the military as a tool for protecting the flow of information, it was soon adopted by universities and other institutions. 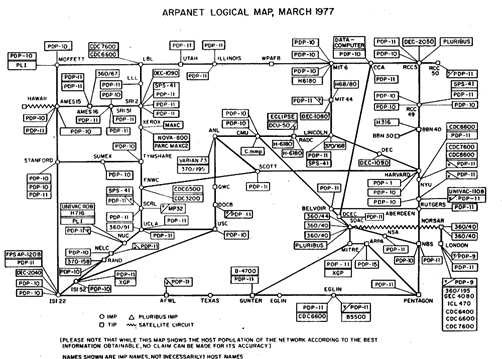 Work on ARPANET began in 1969. In order to protect military information, a new protocol called NCP (Network Control Protocol) was created. Its purpose was to allow an exchange of information between separated computers. The first computers that were connected through this new protocol were from UCLA, Stanford Research Institute, UC Santa Barbara and University of Utah. Due to its utility, many universities decided to adopt it. By 1973, 37 sites already existed on the ARPANET. The first international connections to the ARPANET came from the University College of London in England and the Royal Radar Establishment in Norway.

Many improvements were introduced due to its utilization for non-military purposes. Innovations such as the email (1971), telnet (1972) or FTP (File Transfer Protocol, 1973) were created for NCP. The military developed a new network, MILnet in 1983, destined only for military communication.

ARPAnet eventually lost its attraction and became slower in comparison with other protocols. In 1986, ARPAnet was replaced by NSFnet and then shutdown in 1990, but its contribution to the internet is remarkable and important to remember.

We use cookies for website functionality and to give you a personalized experience on blog.dreamhardware.com. By continuing the navigation, you agree.
Find out more I agree